Home / News @us / An innovative solution by CIAS: SYNAPSES

SYNAPSES introduces you to a new concept of

Disclosed for the first time at SICUREZZA 2019, Milan, it's the innovative solution by CIAS to connect different technologies, especially sensors to video systems, used for protection of one perimeter. 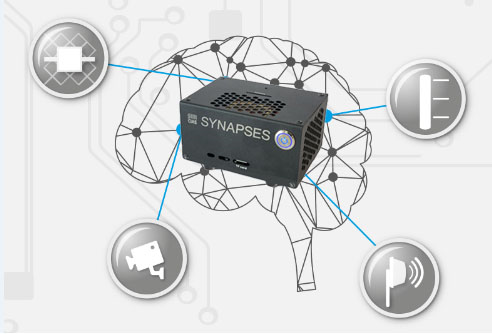 Synapses integrates up to 4 different sensors for each of the 8 freely set up areas, performing a video analysis based on Convolutional Neural Networks generated and "trained" by Deep learning criteria, such as pattern recognition.

By distinguishing in the video-stream the presence of different typical targets of the anti-intrusion systems, such as man, machine, truck, train etc., for each identified target it can increase or decrease the thresholds of the sensors associated with the relevant area.

The result of the analysis is literally "visible" with SYNAPSES. The system actually integrates some functions normally associated with VMS and high-level cameras, such as local recording of the video stream in high definition in case of an EVENT (Alarm, Tampering or Fault) and the relevant marking of the video stream, as well as the integration into the Web-server of the tools necessary for navigation in the system configuration and in the recorded video streams.

This new concept of flexible combination of contextual information significantly reduces the NaR (Nuisance Alarm Rate) and increases the PoD (Probability of Detection) in the perimeter protection, marking an evolutionary leap in the anti-intrusion performance.